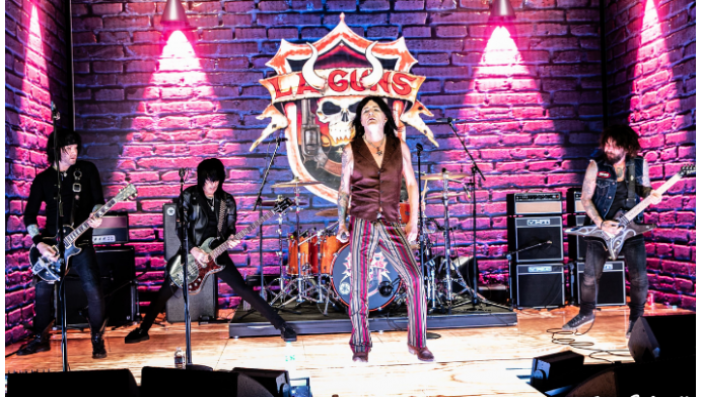 This is a BROADCAST Event

THIS IS A BROADCAST EVENT
You can watch from any device, and from anywhere with your pay-per-view virtual Ticket!

LA GUNS - LIVE ! - (recorded for LiveStream, the last recorded concert from the New Year Celebration Reimagined! before pandemic)
Legends of the Sunset Strip in Hollywood, L.A. Guns starring Phil Lewis and Tracii Guns have released eleven studio albums over the span of almost 30 years, including...

- L.A. Guns was formed in 1983 by guitar player Tracii Guns and, then unknown singer, Axl Rose on lead vocals. The Classic Lineup of Guns have sold 6 1/2 million records, including 1988's L.A. Guns and 1990's Cocked and Loaded, both of which were certified Gold. Cocked and Loaded contained the hit single "Ballad of Jayne" that went to #33 on Billboard's Hot 100 and #25 on the Mainstream Rock charts. From the mid-90's to the mid 2000's, after changing lineups twice, L.A. Guns continued to tour and release new music. Following their successful performance at SiriusXM's HairNation Festival in May of 2016, L.A. Guns went into the studio to record the critically acclaimed, The Missing Peace, the highest selling release for Frontiers Music in 2017. Their 12th release, The Devil You Know, released March 29, 2019 to the same critical acclaim. Since reunited, Tracii and Phil continue to tour around the world with L.A. Guns, includes Johnny Martin (bass), Ace Von Johnson (guitar) and Scot Coogan (drums).

THIS IS A BROADCAST EVENT
You can watch from any device, and from anywhere with your pay-per-view virtual Ticket!

Prices are face values and do not include tax and service charges. These charges will be applied at checkout.

Time left to complete your purchase 00:00

You ran out of time to complete your purchase. Don't worry! Your tickets are still in the cart.